A New Model for Offshore Windpower? 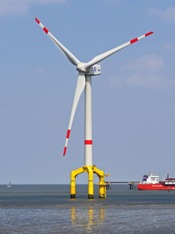 According to an article in Maritime Executive, offshore renewable power developers are about to sign an agreement for the construction of islands in the middle of the North Sea as bases for offshore wind facilities. As the article states: “[t]he generated wind energy could then be distributed from the islands over direct current lines to the North Sea countries of the Netherlands, Denmark, Germany, Great Britain, Norway and Belgium. Transmission cables would simultaneously function as interconnectors between the energy markets of the countries, so that besides transmitting wind electricity to the connected countries, the countries could also trade electricity.”

While this approach has some obvious business and environmental ramifications – and undoubtedly unanticipated issue as well – it at least prompts a needed public discussion of what alternative technical approaches and business models might possibly accelerate the implementation of offshore renewable energy, be it wind or hydrokinetic.