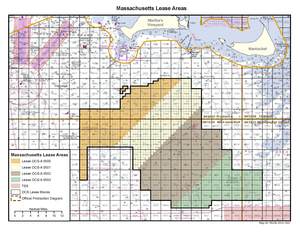 Two energy companies recently secured leases for offshore wind projects in the Massachusetts Wind Energy Area located 12 nautical miles south of Martha’s Vineyard. The federal Bureau of Ocean Energy Management (BOEM) announced the winners of the leases totaling 354,409 acres. RES Americas Development LLC (a RES Group holding company) and Offshore MW LLC (backed by Blackstone Group) netted the leases (respectively, orange and yellow on map). Although the auction was the largest of its kind for the U.S. Department of the Interior, two of the four parcels up for bid did not receive bids. This perhaps signals that although the young market is primed, it has yet to fully accelerate; a condition most likely due to the absence of necessary policy incentives. This blog will keep a watchful eye on the auction of a New Jersey offshore lease slated for later this year that will serve as an additional barometer for the offshore wind industry.