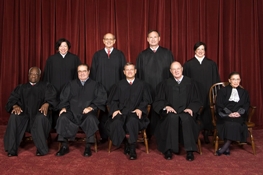 On Monday, the Supreme Court heard oral argument in a case that could significantly inhibit public unions' abilities to collect dues from non-members. Since the Supreme Court's decision in Abood v. Detroit Board of Education in 1977, the courts have distinguished between fees charged by unions for representing public sector workers ("agency fees") and fees charged by unions for financing their political activities. While public unions may not charge non-members fees associated with their political activities, they are permitted under current law to charge non-members for agency fees. The plaintiffs in Friedrichs v. California Teachers Association seek to change that.

In Friedrichs, however, the plaintiffs claim that Abood was wrongly decided because everything that public unions bargain over implicates public policy and therefore has First Amendment implications. For example, public unions determine how much money the government will spend and how it will spend it. Therefore the plaintiffs ask the Supreme Court to do one of two things: (1) overrule Abood and hold that public unions may not charge non-members agency fees; (2) if the Court does not overrule Abood, require that unions give non-members an opportunity to opt-in to paying political activity fees, as opposed to the current state of the law where non-members must only be given an opportunity to opt-out.

At oral argument on Monday, the Court spent the majority of the time asking questions focused on whether Abood should be overruled; little time was spent on the opt-in/opt-out distinction. Those opposed to overruling Abood emphasized that the plaintiffs in the case have a heavy burden in seeking to overturn 40 year old precedent. They also emphasized that the Supreme Court's recent decisions have given states more leeway on First Amendment issues when the state acts as an employer. Those in favor of overruling Abood focused on the fact that agency fees require non-members to subsidize a union taking positions contrary to their beliefs.

Based on the statements made by the Justices at oral argument, we expect that the Supreme Court's decision on this issue will be a close one, and we will keep you updated as the case develops. In the mean time, if you have questions about the payment or collection of union dues, contact a member of Verrill Dana's Labor & Employment Group.