No Oscar for You! A Look at the Morality Clause 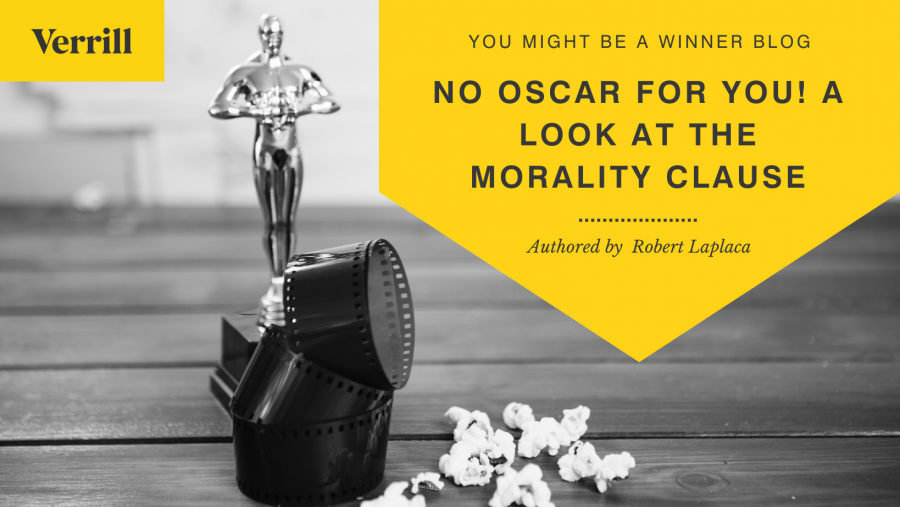 The 94th Academy Awards might have had dramas you never heard of (subtext COVID), but it wasn’t lacking in drama. When Will smacked Chris, a collective “whoa” rocked the Dolby Theater. The drama intensified when the question was tacitly raised, can the Academy take back Will’s Oscar?

The Academy Awards, despite the pageantry and pomp, is essentially a skill contest – just like that “Best Jingle Contest” run by your neighborhood mom and pop store. The Academy Awards do have Official Rules. While I couldn’t find a morals clause in these rules, it is common to see these clauses in contest rules – to protect against that crazy winner who embarrasses the Sponsor. A simple typical clause may read:

Winner, for him/herself and his/her travel companion, agrees to comport themselves in appropriate conduct and to not engage in any illegal or other activity which would harm the Sponsor’s reputation. Failure to do so may result in disqualification or forfeiture of the Prize (or any remaining portion thereof) at Sponsor’s discretion.

Sponsor reserves the right to disqualify any person who attempts to tamper with the Sweepstakes, to harass or interfere with any other entrant, or otherwise acts in an inappropriate or unsportsmanlike way, all as determined by Sponsor in its absolute discretion.

Are these moral clauses enforceable? First, that got me thinking about a similar clause, the sanity clause, but we all know thanks to Chico Marx that there is no sanity clause. But I digress. The simple answer is yes. The Official Rules are a binding contract. And morals clauses are generally enforceable in contracts, most notably for talent and high-level employees.

Morality clauses generally grant the right of a party to terminate if the other party behaves in an objectionable manner or attracts disrepute. Morality clauses actually found their place with libertine actors in the Roaring Twenties following the 1921 Roscoe “Fatty” Arbuckle scandal. The text of the 1921 Universal Studios clause read as follows:

The actor (actress) agrees to conduct himself (herself) with due regard to public conventions and morals and agrees that he (she) will not do or commit anything tending to degrade him (her) in society or bring him (her) into public hatred, contempt, scorn or ridicule, or tending to shock, insult or offend the community or outrage public morals or decency, or tending to the prejudice of the Universal Film Manufacturing Company or the motion picture industry. In the event that the actor (actress) violates any term or provision of this paragraph, then the Universal Film Manufacturing Company has the right to cancel and annul this contract by giving five (5) days' notice to the actor (actress) of its intention to do so.

In fact, even that beloved cherub Babe Ruth found himself subject to a morality clause in his 1922 baseball contract which prohibited him from, among other things, staying up after 1 a.m. prior to a game day.

The common enforcement issues with morality clauses run from vagueness to unequal bargaining power to free speech to privacy to subjective enforcement. The law requires contract terms to be reasonably certain and definite. General terms such as “decency” and “morality” may be too vague to be enforceable. But if conduct is “bad” enough, Courts may be willing to side with a sponsor. For example, in Nadar v. ABC, 330 F. Supp.2d 345 (SDNY 2004) aff’d 150 F. App’x 54 (2d Cir. 2005), the Court upheld ABC’s termination of a soap opera star for selling cocaine to an undercover cop based upon a morality clause that prohibited conduct that “might tend to reflect unfavorably on ABC.” But non-specificity in a morals clause led a different court to reject an archdiocese’s firing of an employee who got pregnant through artificial insemination. Dias v. Archdiocese of Cincinnati, 2012 WL 1068165 (SD Ohio 2012). The Court found there was no meeting of the minds because artificial insemination was not addressed in the clause.

Clearly, the right to employment and the right to get pregnant are more serious than the right to win an Oscar or a trip to Sandals. I suggest that if push came to shove (or slap came to punch), a Court may look more favorably upon a morality clause in Official Rules, but the unequal bargaining power between a Sponsor and a contestant could lurk as a possible impediment to enforcement. Therefore, my suggestions would include the following: