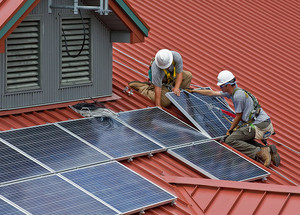 Since September, solar stakeholders have been participating in regular work sessions at the Maine Public Utilities Commission (PUC) to develop an alternative to Maine's current net metering rules. Net metering or "net energy billing" allows utility customers who also generate some of their own power (with solar panels, for example) to pay only for the difference between the energy they generate and the energy they consume. This straightforward concept exists in some form in more than 40 states. But as rooftop solar continues to expand, utilities are beginning to seek alternatives to net metering rules around the country.

From a utility's perspective, customers who generate their own power and remain connected to the grid still rely on the grid like any other customer, but because of net metering, they may not pay their fair share of the costs to maintain the grid. Because a utility's revenues are usually tied to sales, self-generating customers impact the utility's revenues, reducing those revenues without a corresponding reduction in the cost of utility infrastructure. Even if the utility is able to make up the revenue shortfall, utilities argue that net metering will require them to recover more of their costs from customers that do not have the resources to install their own solar panels or other electric generation equipment.

In Maine, the inevitable utility response to net-metering came in 2013-2014, when Central Maine Power Company (CMP), Maine's largest electric utility, proposed a new "standby rate" in its rate plan proceeding before the PUC. As proposed, the standby rate would have imposed an additional charge for self-generating customers based on the customer's demand for power from the grid. The proposal launched a backlash from solar advocates, businesses, universities, and many of CMP's residential customers, and CMP withdrew its proposal.

After the fallout from CMP's "standby rate" the Maine Legislature passed a resolve instructing the PUC to convene stakeholders and develop an alternative to net metering. Maine's Public Advocate has taken a lead role in this process by proposing a "Solar Standard Buyer" (SSB) that would purchase and aggregate the energy generated from solar installations around the state. The theory is that the SSB will be able to offer long-term contracts to provide price stability for customers considering whether to make solar investments. In addition, the SSB will be able to aggregate and monetize the other attributes of solar power, such as Renewable Energy Credits (RECs) and capacity value.

One of the most contentious aspects of the stakeholder process has been determining the proper value to assign to a kilowatt hour of electricity generated by solar panels. Earlier this year, the PUC issued a report prepared by an outside consulting company that valued distributed solar at 33.7 cents/kwh, which includes 13.8 cents in avoided market costs and 19.9 cents in societal benefits, such as reduced pollution. The challenge for the stakeholders is to determine a value for solar that will stimulate solar installations while preserving some benefits for all utility customers. Getting the policy right involves a complex mix of forecasting future energy costs, estimating the full benefits of solar, and carefully phasing out support over time as the costs of solar installations continue to drop.

The sixth and final stakeholder work session is scheduled for January 6, after which the PUC will report out a recommendation to the Maine Legislature's energy committee. Solar advocates have some unexpected good news heading into the final work session: Congress has extended the Investment Tax Credit available for residential and commercial solar installations.

Check back for updates on the final PUC recommendations and proposed legislation in the new year.