by Emily Coombs Waddell on February 26, 2021
Share This Page 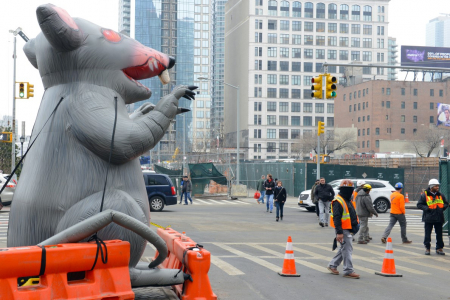 Who is Scabby? Scabby is an inflatable rat, sometimes installed by unions at protests and on picket lines. Scabby has been around since the late 1980s and is a well-known symbol to passersby of an ongoing labor dispute.

At the beginning of February, the General Counsel of the National Labor Relations Board (NLRB), Peter Ohr, requested that two complaints originally filed by his predecessor, Former General Counsel Peter Robb, be dropped. The briefs concerned the use of Scabby and stationary banners during secondary protests. During his tenure as General Counsel, Robb had issued briefs that supported restricting the use of Scabby the Rat during secondary protests. For those unfamiliar with this concept under the National Labor Relations Act, a primary employer is the employer who has a relationship with the union. A secondary employer has a relationship with the primary employer. They could be a supplier to the primary employer or a retail store where the secondary employer sells the primary employers’ products, among other examples. Secondary activity is activity conducted by the union which is intended to put pressure on the primary employer to end an ongoing labor dispute. As an example, you sell widgets to metal fabrication company and the employees of the metal fabrication company are on strike and on Monday when you come to work there is a giant banner and inflatable rat and protest occurring outside your building—your widget company is now home to a secondary protest.

In October 2020, the NLRB announced that it would be accepting briefs on bannering and displaying Scabby the Rat during secondary protests. The purpose of this solicitation was to evaluate whether the Board should continue with its current precedent of allowing these types of displays at secondary protests, in keeping with the precedent set in Carpenters Local 1506 (Eliason & Knuth of Arizona), 355 NLRB 797 (2010) and subsequently upheld in Sheet Metal Workers Local 15 (Brandon Regional Medical Center), 356 NLRB 1290 (2011), or if the Board should turn to a new standard for evaluating these types of disputes. The General Counsel’s recent request to withdraw these complaints signals, at least for now, Scabby will be safe from attack under the new Democratic-appointed General Counsel.

Beyond the sparing of Scabby, this transition marks major changes ahead at the NLRB. During the 2020 Presidential Campaign, the Biden team voiced support for the Protecting the Right to Organize (PRO) Act, which contains provisions that will bring about big changes in labor and employment law should it be enacted. For starters, the PRO Act could increase the population eligible to form a union under the NLRA. The legislation seeks to restrict the definition of a supervisor under the NLRA, resulting in an expansion of workers who would become protected under the NLRA who traditionally were not able to form unions given the supervisory nature of their positions. To a similar effect, the PRO Act proposes amending the NLRA to follow an ABC test to determine employee status, resulting in a larger number of workers being labeled employees instead of independent contractors, and therefore eligible to unionize under the NLRA.

Changes would come as well during a union campaign under the proposed PRO Act. The act would enable employees to use company provided email services to engage in protected and concerted activity, a question that has swung from yes to no in recent years depending on the controlling administration. Additionally, employers would not be able to mandate so called “captive audience” meetings, resulting in employees being able to refuse to attend employer-led sessions discussing unionization before a vote is held. Finally, the PRO Act would impose financial penalties on companies for violations found under the NLRA.

While the PRO Act has not been made law yet, labor law is likely to experience major changes over the coming months and employers should keep an eye on developments. Even employers in nonunion environments, or not concerned with the potential of unionizing efforts in their workplaces, should still take from this flurry of activity the importance of positive employee relations to a business. Especially after the stress of the last year, there should never be a time when the importance of the employer/employee relationship is taken for granted.

Questions on how this may impact your business? Feel free to contact a member of Verrill's Employment & Labor Group.