Maybe it is Gambling - Fantasy Sports Leagues Under Fire 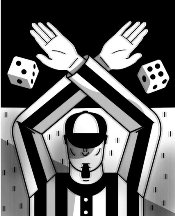 This week we wrote that fantasy sports leagues were (arguably) legal because they are games of skill under the Unlawful Internet Gambling Enforcement Act (UIGEA). Yesterday, however, the Nevada Gaming Control Board concluded – after several months of investigation – the pay-to-play daily fantasy sports leagues (DFS) were gambling under the Nevada Revised Statues and therefore, the operators must possess a gaming license from the Nevada Gaming Commission. The full Notice to Licensees of the Legality of Offering Daily Fantasy Sports in Nevada is set forth here. In response, the two largest daily fantasy sports operators, DraftKings and FanDuel, issued statements that they are, at least temporarily, suspending operation in Nevada.

The Nevada Gaming Control Board did not specifically explain the basis for its ruling, but it likely has to do with its interpretation of the UIGEA. Whether a fantasy sports league is protected by the UIGEA comes down to whether the activities involve skill or chance. The key to the Board's decision may be its conclusion that daily fantasy sports activities do not involve skill as defined by the UIGEA. Daily fantasy sports are an accelerated version of the more-traditional season-long leagues. Rather than accumulating points from player statistics over the course of a season, a fan can win almost instantly based upon a single day's events. It was not this year that daily fantasy sports leagues began to take off. It appears that the UIGEA (passed in 2006) may not have contemplated the advent of this accelerated version of fantasy sports. The UIGEA defines skill as when winning is "determined predominantly by accumulated statistical results … in multiple real-word sporting or other events." Further, "no winning outcome [can be] based upon … any performance or performance of any single real-world team or any combination of such teams." Based on this definition, daily fantasy sports leagues may not cut muster under the UIGEA.

It was also reported yesterday in the Wall Street Journal that the U.S. Justice Department and the FBI are conducting investigations into the legality of daily fantasy sports leagues. This comes on the heels of investigations by the N.Y. and Massachusetts Attorneys General's Offices.

So, while your outfielders and wide receivers are catching balls, your fantasy sports leagues are catching the heat. Definitely more to follow.