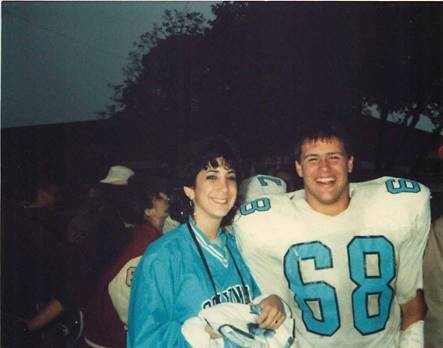 First, a short history lesson. The term "sweepstakes" dates back to the 15th century in reference to a common game where everyone placed a "stake" and the winner "swept" up all of the stakes when he won.

And how about this – the term "sweepstakes" (or "swoopstake") was mentioned by no less than William Shakespeare in Hamlet, Act IV, Scene V, verse 142 where Claudias warns Laertes that if he follows through with his threats of revenge, "that, swoopstake, you will draw both friend and foe, winner and loser."

Turn to the 20th century and marketers began using attractive print ads to promote consumer sweepstakes. Let's take a walk down memory lane to look at a few interesting ones.

In a brazen marketing pitch, the Sponsor makes no bones about the purpose of this Xmas contest: "The object of this picture puzzle game is to get more people acquainted with Minnesota Fountain Pens. … We want you to buy one of our pens for yourself and another one to use as a gift." True to its word, the Sponsor included in the advertisement a handy chart of "Prizes" which increase "If no pens are purchased", "If one $5 pen is purchased", and "If $9 worth [of] pens are purchased." (NB: It's a skill contest, so no purchase necessary arguably didn't apply.)

"The Modern Miracle Contest" (1929) – Or, Ladies: Love, Honor and Obey Doesn't Mean Spending All Of Your Time On Housework!

The advertisement gets right to the point: "This message is addressed to the woman who took a marriage vow that was not put into words. A vow to dedicate her life to something besides housework."

"Dole Treasure Bottle Sweepstakes" (1960) – Or, The Castaway Picks A Winner!

How does it work? You first mail in an entry form. Then, "The first 10 names drawn will be placed in sealed bottles and set afloat by our bonded representatives in known currents off the coast of Hawaii. Other bonded representatives will be stationed on the landing beach. If the first bottle washed ashore has your name on it, you'll win First Prize" – a trip to Hawaii! Neato! 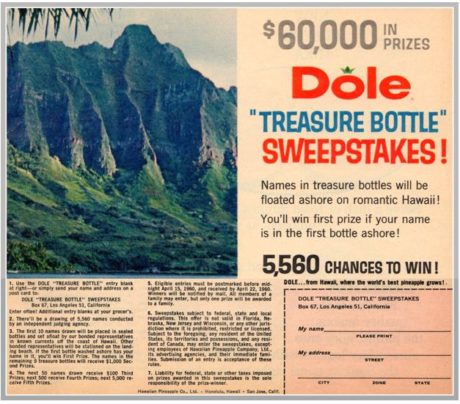 You have to "whisper to just one person how great Skippy is. In return, we'll enter you in our Whispering Sweepstakes." Unknown what actual proof is required to verify sharing.

Fun fact: Norman Rockwell did the artwork for the advertisement!

"You May Already Be A Winner … Space Launch Sweepstakes." (1965) -- Or, The What A Very Catchy Name Sweepstakes!

Using a typical marketing tactic to take advantage of consumers' interest in current events, the maker of the Py-co-pay toothbrush was giving away "Front row seats at an Apollo launching*" and using a two thousand year old marketing device known as the asterisk**, careful readers learned that they won't actually be able to saddle up directly next to Jim Lovell, since the "front row seats" will be "*within limits prescribed by the U.S. Government." (NB: Three miles from the launch pad is the closest spectators can be.) **Apparently, the asterisk was first used as far back as 150 B.C.E. by that old grammarian, Aristarchus of Samothrace who, it is reported "had a remarkable memory and was completely indifferent to his external appearance." (But I really digress.)

Dr. Pepper's "Charge! Get Goin' Again" Sweepstakes (1968) – Or, What The Heck Will I Do With Seven Cars? Sweepstakes, Or the My Tax Bill is What??!! Giveaway

Companies often gave away cars in the '50s, '60s and '70s. And of course, they still do today. But perhaps the biggest car giveaway was when a lucky winner got "One Dodge Charger for each day of the week." 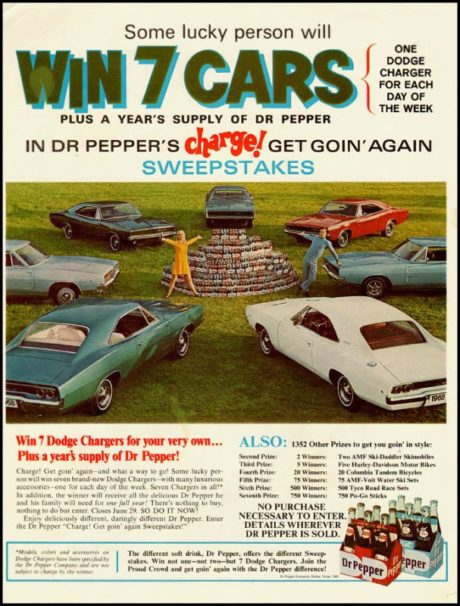 It's no surprise that the Russian bride in the ad looks so unhappy – she's stuck washing floors with booze while her stocky husband is off watching cricket. Maybe she'd be happier if she won that that Modern Miracle washing machine.

Supposedly, this campaign garnered over $90,000 in sales. Dear god. 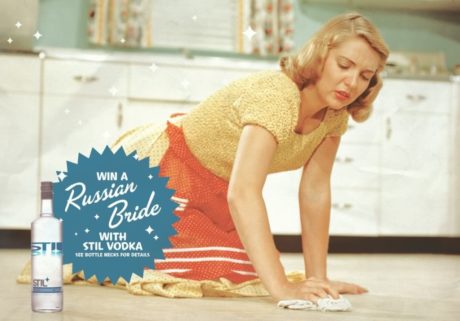