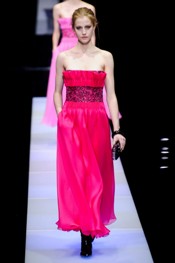 Yesterday marked the end of the Spring/Summer 2016 fashion shows in Milan. Some of next year's fashion has been described a "lyrical nerdiness," "romantic" and "pink and pretty"—so keep your eyes peeled for those trends next year.1 But while my love for clothing is a priority, it's not the topic of this blog post—although Armani is a key player.

Earlier this month, Giorgio Armani's former general counsel, Fabio Silva, filed suit against the company alleging discrimination against him because of his Mexican heritage and later fired him after finding out he had colon cancer. Mr. Silva filed the action in New York Supreme Court alleging that an Armani executive told him that he "doesn't trust mexicans" and treated him unfairly as a result of his nationality.

Mr. Silva has been working as Armani's general counsel since October 2014, however shortly after he started working there, Armani's CFO Thomas Chan repeatedly said he did not "trust Mexicans" while working with Mr. Silva on a deal involving a Mexican vendor. After facing heighted scrutiny and unfounded criticism from Chan, Silva complained about the behavior to the company's COO, Giorgio Fornari. Fornari, however, allegedly did not take any action and instead chided Silva for putting the complaint in writing.

In April, Silva obtained an outstanding performance review, however he alleges that Fornari told him that no raise was attached to the review because of the earlier discrimination complaint. Silva complained that this practice was retaliatory, to which Fornari allegedly responded that if he did not like it he could leave. Soon thereafer, Silva alleges that Armani began searching for his replacement and on July 2, he was fired "minutes after" he told his bosses that he had been diagnosed with colon cancer.

The reason for the termination? Silva alleges that HR told him that he was being let go because the company could no longer "trust" him. It's not often that we are faced with allegations of such blatant retaliation and discrimination, but if proven, these facts would appear to substantiate a claim of discrimination. But remember, at this time we only know one side of the story.

The take away from these facts is the importance of manager training. Keep your managers trained on appropriate behavior when interacting with peers and subordinates and save your company the headache and the costs associated with a lawsuit—in this case, Silva is seeking $75 million in damages. High fashion may come at a high cost in this situation.

1We all recognize Maine, not Milan, is the hub of fashion; I mean, look at the success of the Bean Boot.